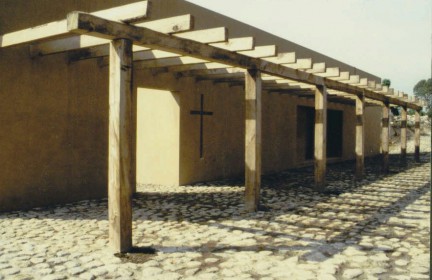 La Cercada is located in México’s central semi-dry region far away from any major urban centres. Built as a resting home on a rocky plateau, its surrounded by cattle land, guava and lemon trees. La Cercada was designed for two families and as such it had to respond to the requirements, illusions and budgets of both.

The project was strongly influenced by two factors: security and austerity. The ranch had to be a discrete place, one that would even merge with its surroundings or even excavated into them. It was thus constructed almost a meter below the natural terrain and the overall scale was kept to a minimum. The challenge was to design interesting and dynamic spaces and provide a sensation of spatial freedom even within such low scale constrains. We understood austerity as the wish to use local, even popular materials: ceramic floors, clay roofing tiles, river stones, local wood, animal bones.

Light played an essential role: limited and filtered in bedrooms; controlled, focused and scenographic in the dining and living where reflected on a water tank it would dance on walls and roofs; open and ruthless on interior patios and access; downplayed and coloured under the bugambilia pergola at the entrance.

To build with ecologically responsible techniques, use local materials, recycle many of such; to respect and consider existing trees and vegetation or to install water and energy saving systems were never enough to consider this an avant-garde project. Maybe its general scheme and layout, its position within its immediate context, its special fluidity, its lights and shadows use and exploitation, its geometric simplicity or its massive sturdiness in the middle of nowhere could give us a glance.