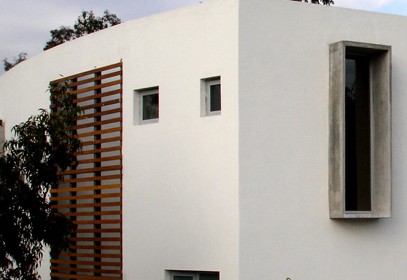 Given the geometry, orientation and strong sloped terrain as well as the immediate context, we wanted to create a “volumetric belt, blind facades and sidewalk nature response” to the exterior and as “large as possible” garden spaces to the interior: a green heart to where houses were going to live. The three houses would then open to the sunny south and protect from the north; would have blind or protected facades to the east (both by wood skins, vegetation or acoustic walls) in order to diminish the nearby noisy highway and would protect their privacy to the east and north public street.

It’s really not exaggerated to say that once the general scheme was defined, each house´s particular design evolved from a retroactive client-architect-client exercise in which spaces started arising after good and hearty debates and idea storming.