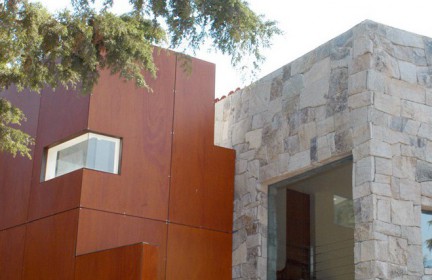 In Mexico City nature is a luxury. This house was built near a pine tree National Park. One of the basic design premises was to “introduce the forest into the house” both physically and metaphorically speaking.

The house spaces rotate around a covered patio with a tree as its heart. Existing views and orientations determined the location of walls and spaces behind these, as well as the exact size and measurement its windows were to have. The idea was to “frame nature” and visually block any manmade structures.

In a house constructed over 2500 mts above sea level, with a climatic variation of 25 degrees Celsius and an important average rainfall it was essential that the patio acted as a “thermal stabilizer”. A protected north, generous openings to the warm south, and “thermal mass” increasing materials such as local stones and clay tiles were also essential factors.

Casa Contadero was planned to grow with time as did the family needs and economic conditions. During the different and particular stages of this growth, the elements that integrate the house had to appear complete by themselves and equally integrated into a wholesome.

The axis that organizes the rest of the elements is indeed the patio.