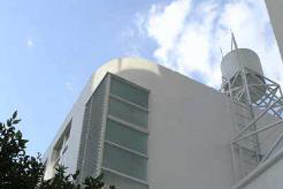 Renovation and extension of a house built around 1940 in La Condesa. Most of the houses on this neighborhood still have 2 or 3 levels and share typical characteristics of its urbanization period. The house occupies a landplot that borders with the street on its west. By liberating the south façade spaces aligned on the northern border creating an “elongated volume” opposed to a patio with the same proportions.

On the lower floor closed spaces follow themselves accompanied by a similar succession of open spaces that create distinct sensations and uses. On the first floor, a library/studio set in two levels articulates the family and bedrooms zone with the main bedroom on the second floor. By taking advantage of the rooftop generosity, both the libraries second level and the main bedroom continue to have an open counterpart space as done with the spaces on the lower floor.

The new program made the addition of a third floor and new services nuclei necessary. On one side the intervention limits itself to the consolidation of the original spaces, its typology, or even the rescue of details, carpentries, materials and finishes; but on the other, it also integrates contemporary spaces. Both true to their time, the new and the existing spaces cohabit in harmony. Natural light presence is the conductor thread and one of the project priorities.