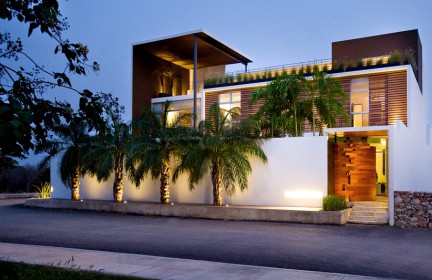 Private house in Mérida Yucatán. This house sits on a privileged site: its long side to the north, on a corner and overlooking a public park. We took advantage of this situation and maximize its visual, thermo-environmental, functional and contextual integration possibilities. In such a way we opened to the “colder” north and extended the project volumes onto as much as possible and almost completely closed the other facades: a solid box that openly overflows on to the park from which it obtains light, wind and life. CASA ANDREU lives to the park but is also if required, tremendously introverted. Interiorly it revolves around a couple of thermal patios that hold a fountain, three palm trees and stairs that unite its three levels. Living, dining and kitchen live within an integrated/sectioned space that flows or constrains as required surrounded by the pool and garden. This is a house with essentially horizontal living spaces in strong contrast to patios that defy its triple height. Public zones on base floor and roof-terrace; private on first level, united by this patios where to ascend becomes an event and where the idea was to finish meeting the sky itself: on the Yucatan in the absence of mountains, the clouds seem to be closer to one…a roof converted into a terrace becomes an excellent excuse to enjoy them.